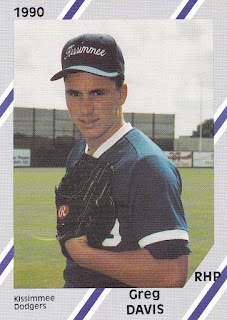 Greg Davis had multiple honors in his pocket as he turned pro in 1990, according to The Los Angeles Times.

He won all-conference honors at El Camino College in 1990. Earlier, at North Torrence High, he made the area all-star team and won league MVP honors, The Times wrote.

While his work in high school and college got him to the pros, it couldn't get Davis a long career. He played two seasons and never made single-A.

Davis' pro career began that year in 1990, taken by the Dodgers in the 13th round of the draft out of El Camino.

Davis played well enough out of high school to get drafted by the Blue Jays in the 50th round in 1988. He instead chose to go to El Camino, where he served as a top reliever.

With the Dodgers, Davis started in the rookie Gulf Coast League. He saw 17 outings, one start. He went 2-2, with three saves and ended with a 2.88 ERA.