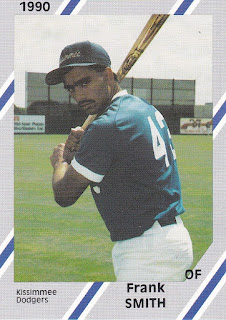 Frank Smith led the rookie Great Falls Dodgers in RBIs, The Deseret News noted, but he couldn't get one in this situation.

Up with the bases loaded and the league championship on the line, Salt Lake reliever John Gilligan got Smith to strike out, The News wrote.

"I knew I could get that last guy. He swings at breaking balls all the time," Gilligan gave his assessment of Smith to The News. "No better way to end it than with a strikeout."

Smith fell short of that title in his second season as a pro. He went on to play in four more. He made AA, but he never made the majors.

Smith's career began in 1990, taken by the Dodgers in the fifth round of the draft out of Riverside Poly High School in California.

At Riverside Poly, Smith helped break open a May 1989 playoff game with a home run.

Smith started with the Dodgers in the rookie Gulf Coast League, at Kissimmee. The outfielder got into 50 games and hit .222.