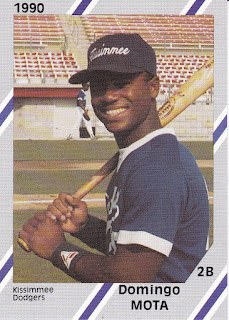 Much of the the conversations would focus on encouragement, the father encouraging the son, the member of the AA Memphis Chicks told the news service.

"When I talk to him, and I'm feeling down, he says to go out there, play hard, hustle, listen to the coaches and don't worry," Domingo Mota told Scripps. "It's always, `Work hard and things will turn around.' "

Domingo Mota worked hard throughout his career, but his work couldn't get him to the majors like his father - or siblings. Domingo played six pro seasons. He never made AAA.

Mota's career began in 1990, taken by the Dodgers in the 31st round of the draft out of Cal State Fullerton.

At Fullerton, Mota helped his club to the College World Series. Prior to the 1990 draft, Mota spoke to The New York Times about growing up in a baseball family.

"My dad was always an inspiration to me," Domingo Mota told The Times. "He was always talking hitting. I used to go to Dodger Stadium and hit with him all the time."

Mota started with the Dodgers in the rookie Gulf Coast League. He hit .343 in 61 games. He picked up two hits, including an RBI double, the GCL Dodgers took the league title.

In 1997, Mota ran an academy for youth across Los Angeles through his father's foundation and the city. Mota had loftier goals for the participants than baseball, he told The Los Angeles Times.