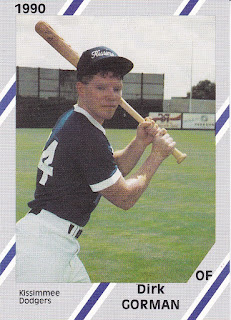 Binghamton University outfielder Dirk Gorman won some postseason honors in 1990, according to the school's record book.

Gorman joined five of his teammates in being named all-conference, according to the record book.

Gorman took his performance that year at Binghamton to the pros. Gorman, however, could win few honors there. He played a single season.

Gorman's professional career began and ended that year in 1990, taken by the Dodgers in the 49th round of the draft out of Binghamton.

The Bronx native went to Binghamton after playing his high school ball at John F. Kennedy High there.

Gorman started with the Dodgers in the rookie Gulf Coast League, at Kissammee. He got into 27 games there and hit .212. He hit one home run, one triple and knocked in two.