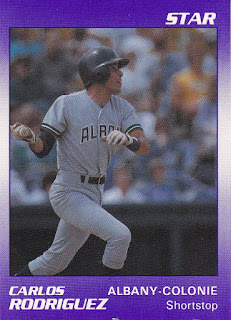 Carlos Rodriguez proved an able fill-in at shortstop for the Red Sox in 1994, able enough to earn an extended stay with the team.

That was even after the return of the player he was filling in for, John Valentin, The Providence Journal News Service wrote.

"I knew that was going to happen because Johnny is a great player," Rodriguez told the news service of the pending move from short. "I was just trying to do my job and fill the spot. I'm happy to be here."

Rodriguez ended up being there through the end of the strike-shortened season, seeing time in 57 major league games in all. It would be the most time Rodriguez would see in the bigs in a single season. He ultimately played in three.

Rodriguez' career began in 1987, signed by the Yankees out of his native Mexico, purchased from the Mexico City Tigers.

He started in the rookie Gulf Coast League, moving to single-A Fort Lauderdale for 1988. He knocked in four runs for Fort Lauderdale in an August 1988 game, helping his team to a win.

Rodriguez returned to Fort Lauderdale for 1989, also getting time at AA Albany. He started an August rally for Albany with a double.

Rodriguez played 1990 between AA Albany and AAA Columbus, then started 1991 with Columbus. He was with Columbus for the mid-June exhibition against the big club in Columbus. To The New York Times, Rodriguez made clear his hopes for that contest.

"I think everybody in here wants to beat them," Rodriguez told The Times.

He was soon with them. He debuted with the New York Yankees days later, getting his call to the Bronx.

With the major league Yankees, Rodriguez ended up getting into 15 games. He picked up seven hits in 37 at bats, for a .189 average. He spent the rest of the year at Columbus.

Rodriguez then spent 1992 back at Albany, then split 1993 between Albany and Columbus. But he never got back to the Bronx.

He then signed for 1994 with the Red Sox, returning to the majors with that extended time in Boston. In his 57 games in the bigs that year, Rodriguez hit .287, knocking in 13.

Rodriguez returned to the Red Sox for 1995, getting into 13 games. He got 10 hits in 30 at bats. They were the final major league games of his career.

Rodriguez, though, is credited as playing in Mexico as late as 2003, getting playing time in 1999 with independent Nashua and then playing 2002 and 2003 back in the Mexican League, ending his career.

Rodriguez has since settled in Ohio, owning and operating The Strike Zone, a baseball training facility in Canal Winchester.