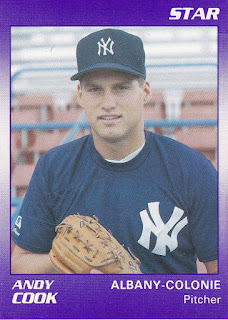 However he started, Cook ended up throwing a complete-game, six-hitter in this August 1990 game for the AA Albany-Colonie Yankees.

"I didn't have my good stuff the last two starts," Cook told The Daily Gazette after the game, "and I didn't to start the game tonight. I just tried to keep the ball down and things worked out early."

Things also eventually worked out for Cook in his career, at least enough to get him to the majors. His stay once he got there, though, was brief, just four outings.

Cook's career began in 1988, taken by the Yankees in the 11th round of the draft, out of the University of Memphis.

For 1991, Cook returned to Albany-Colonie. In one May start, Cook lasted into the seventh, giving up five runs. But his manager was satisfied, The Daily Gazette wrote.

"He's a little bit in transition right now," Albany manager Dan Radison told The Daily Gazette. "He's trying to change his mechanics, and that's a hard thing to do while you're also trying to think about getting people out."

By mid-year, Cook had worked his mechanics to make AAA Columbus. Between the two levels, Cook went 11-8, with a 3.74 ERA.

Cook played at Columbus full time in 1992, then returned for 1993. It was in May 1993 that Cook got his only call to the majors. In his debut, he threw a scoreless ninth in a Yankees blowout win.

He got into three more outings for the Yankees, 4.1 more innings, marking the extent of his major league career. He gave up a total of three earned runs and struck out four.

Cook returned to Columbus by the end of May, playing out the season there. He played two more seasons in the minors, without making it back to the bigs, ending his career.