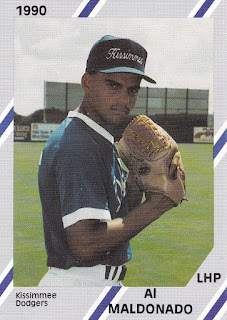 Albert Maldonado closed out this June 1991 game for rookie Great Falls and picked up he save while giving up a single hit, according to The Medicine Hat News.

The Great Falls pitching, including that of Maldonado, drew praise afterward from Medicine Hat manager J.J. Cannon, The News wrote.

"I've got to give credit to their pitchers," Cannon told The News, "they did a pretty good job on our hitters tonight."

Maldonado closed out that game in his second season as a pro. He saw just one more professional campaign. He never made AA.

Maldonado's career began in 1990, taken by the Dodgers in the 33rd round of the draft out of Barringer High School in New Jersey. Maldonado was also credited as Al Maldonado.

Maldonado started with the Dodgers in the rookie Gulf Coast League. He got into 17 games there, all in relief. He ended up with a 6-1 record, three saves and a 3.71 ERA.

He moved to Great Falls for 1991. He also saw short-season Yakima. He got into 21 games in relief between them, saved four games and ended with a combined 2.22 ERA.