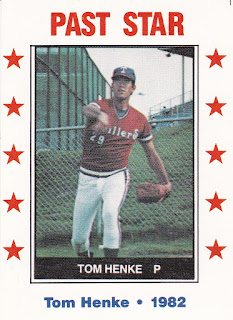 Tom Henke made two All-Star teams over his career, helped the Blue Jays to a world championship and he ended on a campaign with the Cardinals that might have led others to return for more.

Regarding the ending, Henke told The Tulsa World later why he left the game when he did.

"At that point in my career I had accomplished everything I could in baseball and I wanted to see my (four) kids grow up," Henke told The World on the occasion of his induction into the AA Tulsa Drillers Wall of Fame. "It's also good to not stick around too long and retire when the fans still have good memories of you."

Henke picked up many good memories in his career, most of them at the end of ballgames as he saved them. Henke saved a total of 311 games over his career. He also saved two games in the 1992 World Series.

Henke's career began in 1980, taken by the Rangers in the fourth round of the June secondary phase of the draft out of East Central Community College in Mississippi.

Henke started with the Rangers between single-A Asheville and the rookie Gulf Coast League. He went 3-5 between them with a 3.54 ERA.

The Blue Jays then selected him as a free agent compensation pick for 1985 and Henke reached double-digit saves for the first time. He would see double digits for the rest of his career.

"This is the way we've done it 50 or 60 times a year for the last five or six years," Ward told The Los Angeles Times after Henke's second World Series save. "It's almost academic--the eighth inning is mine and the ninth is Henke's."

The Sporting News discussed Henke's Hall of Fame chances in 2017, suggesting that if he played a few more years, he would have gotten a closer look. Henke reflected on his final season.