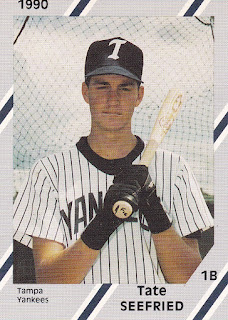 Tate Seefried drew big comparisons as he came out of El Segundo High School in 1990, namely to another El Segundo alum - George Brett, according to The Los Angeles Times.

El Segundo coach John Stevenson, who also coached Brett, told The Times he had the same feeling about Seefried as he did about the Royals legend.

"If George had a bad day, there was always another game to be played," Stevenson told The Times of the Kansas City Royals All-Star third baseman. "I think Tate is the same way."

Seefried had himself enough days as a pro to span nine professional seasons. He spent time in three of those seasons at AAA, but he never made the majors.

Seefried's career began that year in 1990, taken by the Yankees in the third round of the draft out of El Segundo.

Seefried started with the Yankees in the rookie Gulf Coast League. He hit .157 in 52 games. He moved to short-season Oneonta for 1991. The first baseman hit .247 there, with seven home runs.

For 1992, he made single-A Greensboro. Home runs in consecutive games that August after an earlier slow stretch drew praise from his manager Trey Hillman, according to The Greensboro News & Record.

"He's doing a great job. He's driving the ball well to the opposite field and straight away," Hillman told The News & Record. "That's what we want. When he starts trying to pull the ball, that's when he starts to hurt himself."

Seefried moved to the Mets system and saw 33 games at AAA Norfolk in 1997, then 38 games at AAA Ottawa with the Expos in 1998. His 1998 campaign, also played with the White Sox at AA Birmingham, proved his last as a pro.