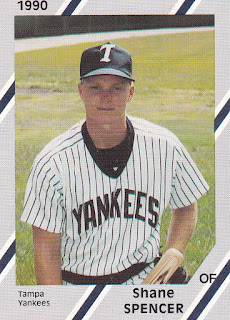 The Yankees' newest star Shane Spencer cautioned in 1998 his sudden appearance - and the home runs that came with it - wouldn't be storybook until everything was complete and the Yankees had the title.

But his run through September - eight home runs, six in the final week - and a home run in his first at bat in the playoffs provided a good literary start.

"I'm just riding it now, cherishing the moment," Spencer told reporters, according to The Tulsa World, after his first postseason shot. "Maybe someday I'll look back on it."

Spencer went on from that spectacular September to a career that saw seven major league seasons and a total of 59 big league home runs.

Spencer's career began back in 1990, taken by the Yankees in the 28th round of the draft out of Granite Hills High in California.

Spencer played his first season with the Yankees in the rookie Gulf Coast League. He hit .184 in 42 games.

He made single-A Greensboro in 1992, then high-A Tampa in 1994. Going into 1995, he played in a game that would impact his relationship with future teammates.

Told if he didn't play in a spring 1995 replacement game for the Yankees, that he would be released, Spencer played. Once he made the majors, he wasn't allowed to join the union.

He made his debut in the Bronx in April 1998. He saw two games in April, one in June and returned in late July. He hit his first major league home run Aug. 7, actually his first two that day.

He finished with 10 total. He also hit two more against Texas in the Division Series as the Yankees went on to the title. He hit one more postseason home run - in Game 4 of the 2001 World Series.

Spencer returned to the Yankees for 71 games in 1999. He hit .234 and eight home runs. By that June, Spencer was struggling with bad luck and the Yankees appeared about to look elsewhere. But Spencer claimed readiness to Newsday.

"I don't care about pressure," Spencer told Newsday. "I wish I had bases loaded, two outs and a chance to win the game every at-bat."

Spencer played two more seasons in Japan, for Hanshin. He it 15 total home runs there to end his playing career.

Spencer soon went into coaching in the minors and independent ball. In 2015, he went to Korea and became a minor league manager there.