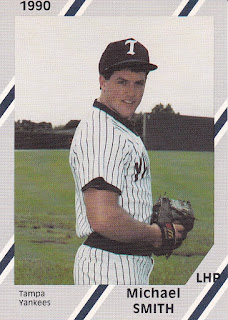 Years before he started in high school and turned pro with the Yankees, Sean Smith spent four months in the hospital, much of that time paralyzed due to Guillain–Barré syndrome, he told the website Rhody Beat years later.

"That experience shaped the trajectory of my life," Smith told the site.

Smith made it back from that to star in high school and play professionally in six seasons. He never made AA, but he did eventually find his faith, which has led him to become a pastor, Rhody Beat wrote.

Smith's baseball career began in 1990, taken by the Yankees in the 15th round of the draft out of Seekonk High in Massachusetts. Smith was also credited with his given first name, Michael Smith.

Smith made single-A Greensboro in 1992. He went 9-9 on the year and had a 3.97 ERA. He went eight innings in an April contest and gave up only three hits.

After not being credited as pitching in 1993, he briefly returned to the mound and the GCL in 1994. In five relief outings, he gave up seven earned in 7.2 innings of work.