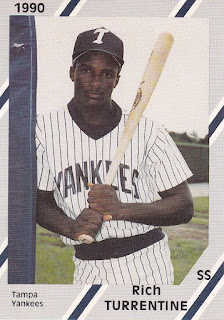 Rich Turrentine bid his teammates at single-A Greensboro goodbye in June 1992, according to The Greensboro News & Record.

The infielder's destination: The rookie Gulf Coast League and plans to make him a pitcher, The News & Record wrote.

"I'm going to give it my best shot," Turrentine told The News & Record as he left.

Turrentine had played into his fourth season that year as a middle infielder. His best shot at pitching lasted nearly a decade longer. He ultimately made AAA, but he never made the majors.

Turrentine's career began in 1989, taken by the Yankees in the 10th round of the draft out of Arkansas High School in Texarkana.

Turrentine returned to Greensboro for 59 games in 1992 before he left to become a pitcher. He saw one outing at short-season Oneonta where he gave up two runs and didn't record an out. He also saw two GCL outings.

In May 1998, Turrentine blew a save, but received encouragement from teammate Matt Raleigh, according to The Binghamton Press & Sun-Bulletin.

"Without a doubt, the toughest loss of the year," Raleigh told The Press & Sun-Bulletin. "It was one that just slipped away. (Turrentine) has been our man all year, he's still going to be our man. It's just part of baseball."

That same year, Turrentine got his first look at AAA, at Norfolk. He saw five outings and gave up a single run over 6.1 innings. He then saw another two outings at Norfolk in 1999.