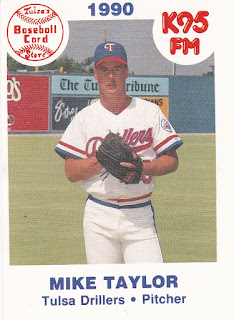 Mike Taylor came on late in this May 1988 game and he couldn't keep the runner from scoring.

Taylor's Gastonia Rangers went into the final frame against Sumter in a scoreless tie, according to The Sumter Item. After the starter put runners on second and third with no outs, Taylor induced a pop-up. He then gave up a single that knocked in the winning run.

Taylor played for Gastonia that year in his second professional season. He went on to play in four seasons. He never made AAA.

Taylor's career began in 1987, taken by the Rangers in the 12th round of the draft out of McLennan Community College in Texas.

At McLennan, Taylor earned All-American honors in both 1986 and 1987. He also saw himself drafted twice previously, by the Orioles and the Brewers but he did not sign.

He started with the Rangers at single-A Gastonia. He got into 13 games there, starting three. He had a 4.46 ERA, one win and two saves.