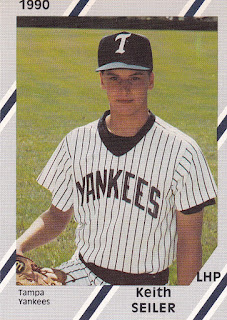 Keith Seiler wasn't sure if he'd sign, but his selection by the Yankees in 1989 meant his long-term goal neared reality, he told The Newport News Daily Press.

"It's been a dream of mine since little league and I'm happy finally to realize my dream," Seiler told The Daily Press. "I couldn't be more happy."

Seiler didn't sign that year, but he did sign the next. His career lasted five seasons. He never made the majors.

Seiler's career began that year in 1990, taken by the Yankees in the 21st round of the draft out of the University of Virginia.

Seiler started with the Yankees between the rookie Gulf Coast League and high-A Fort Lauderdale. The reliever got into eight games at Fort Lauderdale and gave up a single earned run in 16 innings.

He played 1991 largely at single-A Greensboro, but he also got a two-game look at AAA Columbus. He gave up on earned run in 2.1 innings at Columbus.

Seiler got another three-game look at Columbus in 1992, while also seeing Fort Lauderdale and high-A Prince William. He got into 28 outings between the three clubs, had a 4.21 ERA and saved five games.