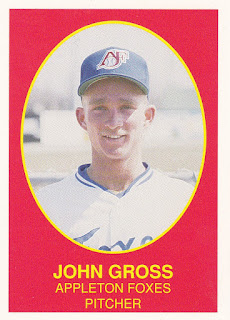 John Gross pitched near-flawless baseball this night in July 1989, but the win eluded him, according to the South Florida Sun-Sentinel.

Gross threw eight innings of one-hit ball for single-A Baseball City before turning the game over to a reliever. The reliever couldn't record an out and Baseball City lost 2-1, The Sun-Sentinel wrote.

Gross threw those eight innings in his first season as a pro. He went on to see four more seasons, but a spot at AA or higher also ultimately eluded him. He played three seasons at high-A, but didn't play higher.

Gross' career began that year in 1989, taken by the Royals the previous year in the 43rd round of the draft out of Clovis High School in California.

Gross played his first season between Baseball City and the rookie Gulf Coast League. He went 4-5 on the year, with a 3.22 ERA.

He played 1990 at single-A Appleton. There, he started 13 games and went 3-4. He ended with a 3.36 ERA. That July, he encountered some bad luck as a disputed hit-by-pitch was quickly followed by a home run in a loss.