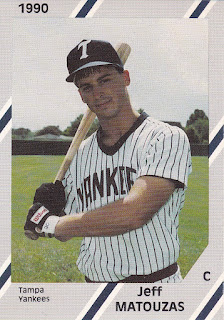 Jeff Motuzas could hardly believe it in October 2001, according to his hometown Nashua Telegraph.

After spending more than a decade in baseball, seven as a catcher in the minors, the Arizona Diamondbacks bullpen catcher was going with his team to the World Series.

"We got in at four in the morning (from Atlanta on Monday)," Motuzas, the Diamondbacks bullpen catcher told The Telegraph from his home in the Phoenix suburbs. "I got up at eight, and all day I didn't stop thinking about it. I got all the papers that said 'Diamondbacks are going to the World Series' and I thought, Oh my God, I'm part of it.'"

Motuzas not only helped the Diamondbacks by warming up the club's pitchers, he also took his role further by constantly working to boost team morale - by eating or doing almost anything for money.

His exploits were featured in The Wall Street Journal in 2011, where he told of snorting wasabi, being fired at with a BB gun from close range and even eating snot, all to lighten players' wallets.

"It's all done to relieve stress and entertain the guys," Motuzas said, according to FoxSports.

Motuzas' career in baseball began in 1990, taken by the Yankees in the 13th round of the draft out of Nashua High School in New Hampshire. Motuzas was also credited by the spelling Jeff Matouzas.

Motuzas played his first season in the rookie Gulf Coast League. He hit .146 in 29 games that season. He picked up a single in a July game and walked in a run in an August contest.

"I've been slumping a lot lately," Motuzas told The Washington Post afterward. " . . . But I just went out and swung the bat today."

He then played 1995 at high-A Tampa, where he got into 28 games. He saw his final playing time in 1996, including five games played at AAA Columbus.