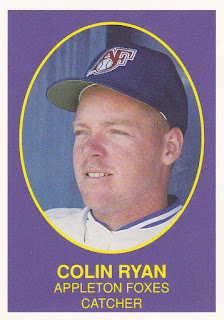 Colin Ryan's college coach knew Ryan had the skills to make it in the pros, the coach told The Bangor Daily News in June 1989.

The occasion was the University of Maine catcher signing with the Royals after being drafted in the 14th round.

"Colin has the God-given tools they need," Maine coach John Winkin told The Daily News. "Nobody throws better and he has made great progress as a defensive catcher and as a handler of pitchers. And he's got a good baseball mind."

His baseball mind aside, Ryan never could use his tools enough for a long career. Ryan played just three seasons. He made AA briefly, but he never made it higher.

Ryan went to the University of Maine out of Newton North High School in Newtonville, Mass.

At Maine, Ryan was credited with helping the Maine pitching staff, as well as throwing out runners and picking them off first, according to The Daily News.

"He's done a heckuva' job handling our pitchers," Winkin told The Daily News in April 1988. "His instincts and judgement are much better. He's learned to make use of the pitchers' strengths."

With the Royals, Ryan started at short-season Eugene. He got into 37 games, hitting just .208. Ryan went to Eugene not knowing much about the city, he told The Eugene Register-Guard after arriving. He also changed baseball allegiances.

"I was a Boston Red Sox fan until Monday," Ryan told The Register-Guard early that June.