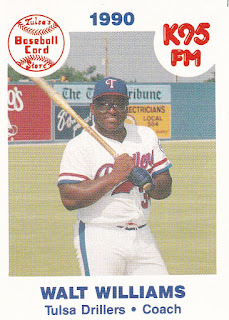 Walt Williams made his return to Comiskey Park in 1988 and he took in the sights, according to The Chicago Tribune.

He also got to work as the White Sox' new first base coach.

"I'm nervous," Williams told The Tribune that April. "I'd really like for us to win. This place looks so much different. It`s nice."

Williams' return came a decade and a half after he last played at Comiskey for the White Sox. Williams played six seasons for the South Siders, part of an overall career that spanned 10 major league seasons and two in Japan.

After several years away from the game, Williams then returned as a major league coach and minor league manager.

Williams' career in baseball began in 1963, signed by the Houston Colt 45s as an amateur free agent out of the City College of San Francisco. Williams is sometimes referred to by his nickname "No Neck" Williams.

Williams' path to the majors turned out to be quick. He played 1963 between single-A Modesto and single-A Durham. He then made Houston for 10 games in 1964, He went 0 for 9.

He then moved to the Cardinals system, taken off waivers that May. He didn't return to the majors until 1967 with the White Sox.

Williams played nearly the entire season upon his return, getting into 104 games and hitting .240.

"Williams is an aggressive hitter who doesn't fool around up there at the plate," Williams' manager Eddie Stanky said, according to The Sarasota Journal. "He attacks the ball. He'll swing at anything he can reach."

He moved to the Indians in a trade for 1973. That August, he burned his old team by breaking up a Stan Bahnsen no-hitter with a single. His final seasons came in 1974 and 1975 with the Yankees.

Williams then left the game, eventually working to customize cars, according to The Philadelphia Daily News. He returned to the game with a call from the White Sox.

He coached 1988 with the White Sox, then became a coach with Texas in Arlington. In 1990, he returned to the minors as a coach at AA Tulsa.

From 1992 to 1994, the final year he is recorded in the game, Williams served as manager at single-A Gastonia, then Charleston.