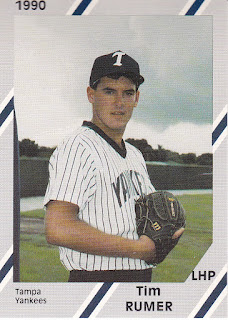 Tim Rumer expected to go around the 10th round of the draft, he told The Duke Chronicle in June 1990. Instead, the Duke hurler got taken by the Yankees two rounds sooner, in the eighth.

As for why he signed, Rumer had a simple response for The Chronicle.

"I signed because I wanted the opportunity to fulfill a life-long dream of playing major league baseball," Rumer told The Chronicle.

Rumer went on to play in eight professional seasons. He made AAA, but he never made the majors. He has, however, gone on to a major league-connected career in baseball - as a business manager for the major league glove supplier Mizuno.

Rumer's career began that year in 1990, taken by the Yankees 219th overall out of Duke.

Rumer started his career with the Yankees in the rookie Gulf  Coast League. Among his new teammates there was future Hall of Famer Mariano Rivera. In his 2014 memoir "The Closer," Rivera recalled comparing his fellow pitchers, including Rumer, to himself.

"I watch these guys throw and I figure the radar gun is about to break," Rivera wrote, "they are throwing so hard. Rumer has a curveball that breaks about two feet."

Rumer provided his own 1990 recollections of Rivera in 2011 to ESPN.

"He looked the same, with maybe a little more hair," Rumer told ESPN of Rivera. "He was a quiet, reserved guy, who went about his business and did his work."