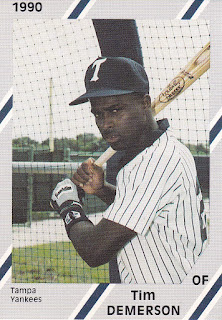 Tim Demerson's new manager at single-A Greensboro Trey Hillman believed Demerson could help the team, especially with his speed, according to The Greensboro News & Record in May 1992.

Demerson, who had just been at high-A, initially wasn't so sure about the move, he told The News & Record.

"I kind of looked down on it at first," Demerson told The News & Record of the demotion, "But they said it was the best for me. I said okay."

Demerson's stay at Greensboro proved brief, just two games. He went on to play one more season in the Yankees system and one in independent ball, but he never could make the move to AA or higher.

Demerson's career began in 1989, taken by the Yankees in the 51st round of the draft out of Howard College in Texas.

Demerson started with the Yankees in the rookie Gulf Coast League. He hit .223 in 42 games. He hit two singles and a two-run double in a June game.

Demerson's 1992 season mirrored the season before. This time he saw 51 games at Fort Lauderdale and his two at Greensboro. He hit .200 between them.

Demerson's speed was again promoted in 1993 to The San Bernardino County Sun as one of the fastest in the organization. But his 1992 season had been hampered by a knee injury. He saw 115 games there and hit .261. He also stole 24 bases.