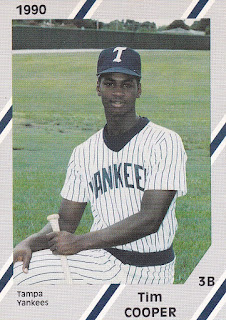 Tim Cooper sealed the game for the Chico Heat this night in June 1999 with a three-run home run, according to The Reno Journal-Gazette.

The home run helped Chico continue a run of success, but, despite his own individual accomplishment, Cooper pointed to his teammates.

"The main thing is we're a team," Cooper told The Journal-Gazette. "On any given night any one of our guys could step up and carry the burden."

Cooper played on many nights over his long, 13-year career. He never made AA in seven seasons in the minors, but he went on to play six more campaigns in independent ball. He played five of those seasons at Chico.

Cooper's career began in 1989, taken by the Yankees in the 19th round of the draft out of Sacramento's Hiram W. Johnson High.

Cooper played his first two seasons in the rookie Gulf Coast League. He hit .182 his first season there and .268 his second.

"No one wants to hear the translator. Not to take anything away from Spanish, but that's going to be the moment when people could learn who you are," Cooper told KRCR in 2014. "So from that moment on he continued to learn his English."