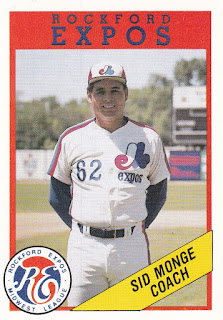 Sid Monge came on in the ninth inning of this July 1979 contest for Cleveland and picked up the save.

But this safe was actually a save, one with no margin for error: Bases loaded, nobody out, Indians up 2-1. Monge responded by getting a pop-out, line-out and strikeout to end the game.

"You have to do what you do best," Monge told The St. Joseph News-Press afterward. "I had to go out and get them with my best stuff. I threw all fastballs. I spotted them in and out."

Monge picked up that save in his fifth season in the majors. He also picked it up in the season in which he became an All-Star.

Monge went on to play in the majors for a decade, not playing his final game until 1984. From there, he's gone on to a long career as a coach in the minors.

Monge's career in baseball began in 1970, taken by the Angels in the 24th round of the draft, out of Brawley Union High School in California.

With the Angels, Monge started at rookie Idaho Falls, making AA Shreveport for 1972 and then AAA Salt Lake City in 1975.

It was also in 1975 that Monge made his debut in the majors. With the Angels that September, Monge got into four games, two starts, with an ERA of 4.18.

In a May 1978 relief outing, Monge went 6.1 innings, giving up a single hit and no runs against the Yankees. He also picked up the win. He also struck out Reggie Jackson twice.

"I saw some great pitching tonight," Jackson told reporters afterward of Monge. "He threw hard and had a super breaking ball. I'm swinging a good bat, but the man did a job on me tonight."

Monge played with the Indians through 1981, moving to the Phillies in 1982. He then ended his career with stints in San Diego and Detroit.

Monge soon turned to coaching. By 1989, he was with the Expos, coaching in the rookie Gulf Coast League. He moved to single-A Rockford for 1990. He then moved to the Tigers system and single-A Fayetteville for 1992.

In 1997, Monge is listed as pitching coach at AAA Las Vegas. He is last credited as coaching in 2007, at rookie Johnson City. He never made the majors as a coach.

In 2001, Monge also served as pitching coach at Johnson City, working with the young Cardinals prospects, and Rick Ankiel. Ankiel then was trying to get his pitching mechanics back after falling apart the previous post-season.

"Be on time, pay attention and work hard. I'm here to help you," ESPN The Magazine quoted Monge as telling his players as Monge turned to Ankiel to try and build his confidence. "You're gonna be named in the same breath as Bob Gibson, Tom Seaver and Nolan Ryan. I'm here to help you, too."