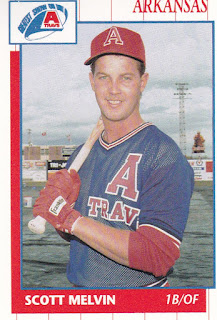 Into his post-playing career as a minor league manager in 1994, rookie Arizona League manager Scott Melvin explained to The Arizona Republic that June a big part of his job.

That part included pep talks to fight back against player homesickness, he told The Republic.

A few years earlier, it was Melvin leaving his home in Illinois to start his own professional playing career. He played seven seasons and made AA. He never made the majors.

Melvin did, however, go on to several years as a minor league coach and manager before he turned to his longer term job as a scout.

Melvin's career in baseball began in 1985, signed by independent Salt Lake of the Pioneer League out of Bradley University in Illinois.

Melvin signed with the Cardinals for 1987 and played that year at single-A Springfield. He hit .292 over 115 games. He also hit 9 home runs and knocked in 69.

Melvin started his post-playing career quickly, listed as hitting coach on that same 1991 Arkansas team. He moved to short-season Hamilton as hitting coach in 1992 and and single-A Springfield for 1993.

He then turned scout. He first scouted for the Cardinals and, by 2012, for the Royals.

Melvin spoke with The Quincy Herald-Whig in July 2012 about scouting the summer collegiate Prospect League, including through extreme summer heat.