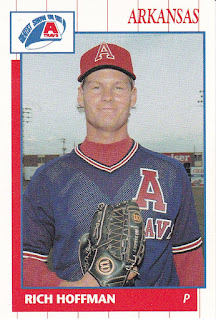 Rich Hoffman found his career in baseball, just not the usual career to come from the game like in playing and coaching.

Hoffman found his career in injury, according his bio on his MedDiagnostics Rehab site, a company he owns and manages in Florida.

"A former pitcher with the St. Louis Cardinals organization, Mr. Hoffman sustained a shoulder injury, wherein he had his first encounter with Physical Therapy," the bio reads. "He found the field very rewarding and became a licensed therapist himself."

He now owns and operates multiple physical therapy practices in the state, the bio reads.

Hoffman's path to physical therapy began in 1988, taken by the Cardinals in the 31st round of the draft out of Long Island University, Brooklyn Campus.

Hoffman played his first season with the Cardinals over three levels. He saw 11 outings, nine starts at rookie Johnson City. He went 7-2, with a 3.19 ERA there.

He also got four starts that year at single-A Savannah, where he picked up three wins, one loss and a 1.45 ERA. Then he made it for one start at AA Arkansas. He gave up four earned in two innings of work.

He returned to Arkansas for 1990, getting four starts. He picked up no wins and two losses, his first in an April game. He played the rest of the year back at St. Petersburg. He went 6-8 there, with a 3.61 ERA to end his career.

Hoffman soon settled in Florida. He received his physical therapy degree from Miami Dade and then got his masters from Nova Southeastern University, according to his bio. He owns and manages MedDiagnostics and Superior Rehab Systems.
1990 Minor League Tally
Players/Coaches Featured:3,073
Made the Majors:1,128-36.7%
Never Made Majors:1,945-63.3%-X
5+ Seasons in the Majors: 467
10+ Seasons in the Minors:280
Posted by Steve78 at 8:00 PM