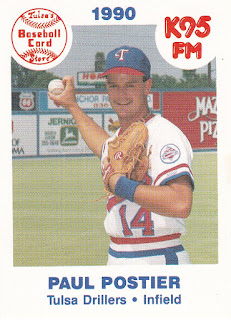 Paul Postier had a bit of a home-field advantage in the Rangers system. The Tulsa-native played five-straight seasons between AA Tulsa and AAA Oklahoma City.

The Tulsa-native had no shortage of fans in the stands.

"It seems like I always play a little bit better when Robin and my parents are here," Postier told The Oklahoman after helping Oklahoma City to an early-1992 win. "Every time up I know some people are going to be rooting for me."

Even with the seeming advantage, Postier never got to the ultimate, non-Oklahoma destination in Texas. He played a total of seven seasons as a pro. He didn't make the majors.

Postier's career began in 1986, taken by the Rangers in the 17th round of the draft out of Southeastern Oklahoma State University.

Postier played his first season between single-A Daytona Beach and single-A Salem. He hit .231 overall in 52 games. He moved to single-A Gastonia for 1987. He hit .231 there, with 37 RBI.

Postier's third season with Tulsa came with an increased role. He got into 89 games at various positions. He hit .236.

Postier made AAA Oklahoma City for 1991. He told The Oklahoman that April the surroundings had him already feeling at home.

"You're sort of a local hero here. With family and friends in the stands it helps make it easier for you to play up to your ability," Postier told The Oklahoman. "I feel real comfortable here."

He hit .242 there over 70 games. Postier then played 1992 between Tulsa and Oklahoma City. In June, he found himself back in Tulsa, helping his hometown Drillers to a win with a two-run triple.

"Normally, when a player gets sent down it isn't a happy occasion," Postier told The Tulsa World afterward. "I can't kick because I'm living in my new home. My wife and I are happy. Besides, I feel comfortable playing for Tulsa."