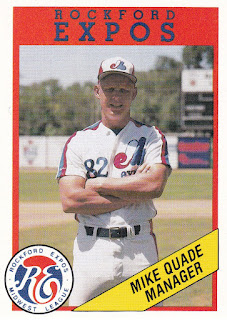 Mike Quade took over the Cubs, and the Cubs turned around. Where they had gone 5-20, Quade then took the team to a 24-13 record down the stretch, according to ESPNChicago.com.

"The way we played those last six weeks, why not?" Quade told ESPNChicago after being named manager for 2011. "I believe that from day one -- why not us? There are plenty of examples of teams that had rough years, finished strong -- San Diego -- and then built on it the next year."

While Quade was ultimately unable to build on that early success as manager, he had been building to that moment for more than three decades. He built to it first as a player in the minors, then as a minor league manager and, later, major league coach.

Quade's long career in baseball began in 1979, taken by the Pirates in the 22nd round of the draft, out of the University of New Orleans.

Quade ultimately played five seasons with the Pirates, making AA Buffalo in 1981, but not making it higher. He played his final games in 1983.

By 1985, Quade was managing in the minors, leading the single-A Macon Braves. In late-June 1986, Quade described part of his philosophy in choosing who to start, young Macon players Tony Chance or Joey Zellner.

"As far as I'm concerned, you've got to go out and work for a position," Quade told The Spartanburg Herald-Journal, "and Zellner has been playing well in left. I'd love to play them both."

After a move to the Athletics system in 1996, Quade worked his way up to Oakland, managing single-A, AA and AAA entries. In 2000, he became first base coach for the Athletics in the majors.

In spring 2001, the first base coach Quade watched as the Athletics worked on their baserunning skills, with the addition of a young Johnny Damon.

"It's amazing what the addition of a little speed can do for your whole baserunning look," Quade told The San Francisco Chronicle. "We've added a flier, and that raises the bar for everyone."

Quade arrived with the Cubs in 2003, taking over as manager of the AAA Iowa Cubs. He stayed there for four seasons, then moved to Chicago in 2007 as third base coach.

It was in August 2010, after Cubs manager Lou Piniella stepped down, that Quade took over the big club himself.

"We got a taste of that winning in 2010," Quade told ESPNChicago after he was relieved of his duties, "but everyone knows the game is about the players, and this year we weren't deep enough as an organization to survive some of the injuries. I know we played better baseball the last couple of months of the season, but we all know that wasn't good enough."

For 2014, Quade has signed on with the Yankees, serving as the club's roving outfield and base running coordinator.