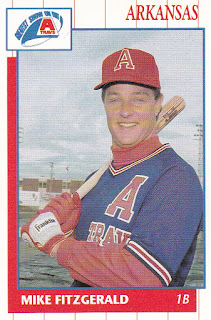 The Cardinals' Bob Horner went down with a shoulder injury in June 1988 and St. Louis chose AAA first baseman Mike Fitzgerald to replace him - and make his major league debut, according to The Louisville Courier-Journal.

Fitzgerald told the paper after being called up that, despite a tough stretch at Louisville, he felt himself ready to show what he could do in the majors.

"I had heard that Horner was hurt and I knew they'd have to do something," Fitzgerald told The Courier-Journal. "I was hoping it was going to be me. I wasn't tearin' it up here, but I'm glad to get the chance. I'll do my best."

Fitzgerald went up and got into 13 games. He picked up nine hits and a .196 average. Those 13 games proved the extent of his major league career.

Fitzgerald's career began in 1984, taken by the Cardinals in the first round of the June secondary draft out of Middle Georgia College.

Fitzgerald started with the Cardinals at rookie Johnson City. He hit .345 there, with seven home runs.

He started at AAA Louisville for 1988 and then got his June call-up to St. Louis. He picked up his first hit in the fourth at bat of his debut, a single to left. (He also got into three games against Montreal, the club with another Mike Fitzgerald on its roster, but that Fitzgerald didn't play in the series.)

Fitzgerald picked up one double in his nine hits and drove in one run. Fitzgerald played the remainder of that year at Louisville.

He returned to Louisville for 1989. His average dropped to .219 over 103 games. He then started 1990 back at Arkansas. He hit a home run in a June game and had an RBI single in another. But, a few days later, the Cardinals released him. He played out the season and his career with the Phillies at AA Reading.

Fitzgerald later settled in Rochester, Ill., where his son, also named Mike Fitzgerald, went on to play college baseball at Indiana State and spent time in the rookie Arizona League for the Padres in 2014.