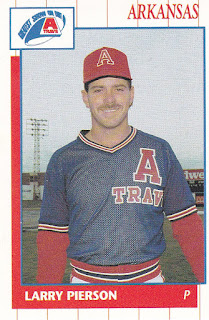 After more than a decade in the minors as both a player and a coach, Larry Pierson knew what he liked to see in pitchers, according to The Washington Post.

He liked his pitchers to work efficiently and be direct.

"One thing that I don't like to see is a pitcher going out there and being tentative, picking at the corners and falling behind in the count," Pierson told The Post in June 2003 as he coached at high-A Potomac. "The longer a hitter prolongs an at-bat, the more pitches he sees, the better chance he has picking out a pitch he likes to hit."

Pierson learned his approach through four seasons in the minors. He made AA, but not the majors. He then went on to a career in the minors as a coach. He then got out and coached high school.

Pierson's career in baseball began in 1987, taken by the Cardinals in the 35th round of the draft out of the University of Missouri.

Pierson played his first season at rookie Johnson City. He went 8-4, with a 1.68 ERA.

Pierson made AA Tulsa for 1990. He spent time on the disabled list in June. Overall, he got into 21 games and started six. He ended with a 3-4 record and a 5.48 ERA to end his playing career.

Pierson started his coaching career by 1997. He coached that year at short-season Lowell. He coached at high-A Sarasota for three seasons through 2002. He then went through Potomac, Dayton and Salem in 2007. His Salem time was his last recorded in the minors.

In 2016, he became head coach at a high school in Illinois, after three seasons spent as an assistant. He told the County Journal as he took the head job what his team needed.

"The past few years, we've been struggling to make the plays and finish with our throws," Pierson told The Journal. "We've been focusing on team fundamentals defensively. We realize we can't give opposing teams three or four outs in an inning. We're going to score runs, but we can't hurt ourselves defensively."
1990 Minor League Tally
Players/Coaches Featured:3,070
Made the Majors:1,127-36.7%
Never Made Majors:1,943-63.3%-X
5+ Seasons in the Majors: 467
10+ Seasons in the Minors:280
Posted by Steve78 at 1:00 PM