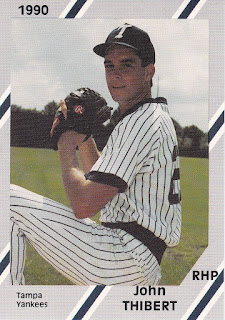 John Thibert's Canyon High School won this game big in March 1988 and Thibert had a hand in a couple of their runs, according to The Los Angeles Times.

Thibert first hit a ball to right with the bases loaded. The fielder dropped the ball, allowing one run to score, The Times wrote. Thibert later singled and scored on a double.

Thibert went on from Canyon High to play in college and in the pros. He played five seasons as a pro, all as a pitcher. He briefly made AA, but not the majors.

Thibert's career began in 1990, taken by the Yankees in the 38th round of the draft out of Mesa Community College.

He played 1991 between the GCL and short-season Oneonta. He saw three outings, one start at Oneonta. He gave up 10 earned in 3.1 innings.

Thibert saw Oneonta again in 1992 and six relief outings at single-A Greensboro. He had an 8.22 ERA at Greensboro and a 3.60 mark at Oneonta.