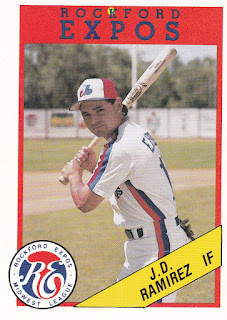 But teachers still have summers off. And there Ramirez was, in the summer of 1997, playing in his ninth professional season.

"I didn't have anything to do over the summer," Ramirez told The Avalanche-Journal. "I figured I would come on back, have fun with the guys and put up some more numbers."

Ramirez came back for that summer and two more. By the time his career was over, Ramirez had time in 11 professional seasons. In that career, though, he made one brief appearance at AAA, but he never made the majors.

Ramirez' career began in 1989, signed by the independent Salt Lake Trappers out of his home state of Arizona.

With the Trappers, Ramirez got into games, knocking a double in a mid-July win. Ramirez also caught the eye of the Expos, Montreal purchasing his contract in August. He played out the year at short-season Jamestown.

For 1992, Ramirez moved back to independent Salt Lake City. In 44 games, he hit .347. He didn't start with the team until that July, according to The Deseret News, collecting three hits in his first game back.

"I felt right at home," Ramirez told The News upon his return. "They treated me like I never left."

After spending 1993 with independent Sioux City, Ramirez returned to affiliated ball for 1994 and 1995 with the Angels. He played most of that time at AA Midland, but he also got a game at AAA Vancouver.