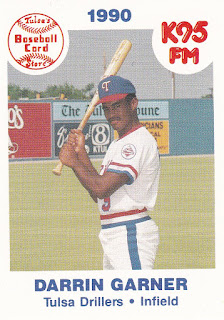 Darrin Garner made AA Tulsa in 1989 and he hoped improvements in his hitting would help him get even higher, he told The Tulsa World that August.

He spoke to The World in his fifth pro season and in the midst of a 14-game hitting streak.

Garner's hitting - and his defense - went on to get him two more seasons and five games at AAA. He never made the majors, but he has gone on to a long career as a coach and manager in the minors.

Garner's career began in 1985, taken by the Rangers in the first round of the secondary phase of the June draft out of Orange Coast College in California.

Garner started with the Rangers between the rookie Gulf Coast League and single-A Burlington. He hit .214 between them with 18 stolen bases.

He made AA for the first time in 1989, hitting a career-best .261. He returned to Tulsa for 1990. His final season came in 1991 between high-A Port Charlotte and AAA Oklahoma City. In five games at Oklahoma City, he picked up three hits in 11 at bats, ending his playing career.

Garner then started his coaching career. He served as hitting coach for the Rangers' GCL team in 1992, then for high-A Charlotte in 1993 and 1994.

In July 1994, Garner recalled his time as a player - and the road trips. "This is cake," Garner told The Sarasota Herald-Tribune after relatively short trips for Charlotte. "I could do this the rest of my coaching days."

Garner moved to the Mariners system by 1997, serving that year as manager of the club's rookie Arizona League entry. In 1999, he managed high-A Lancaster. He assessed his Lancaster team to The Los Angeles Times that April.

"I've got a lot of kids who work hard," Garner told The Times. "We should be very sound defensively."