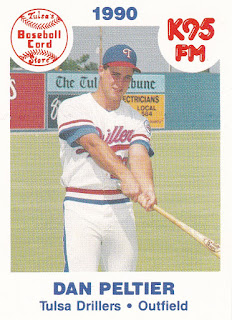 It was the bottom of the third. The Rangers were already up 4 to 2 against the Yankees when Dan Peltier stepped into the batter's box to face Bob Wickman. On a 3-0 count, Peltier swung away, hitting the ball over the right field fence.

"It was phenomenal," Peltier recalled to a television interviewer years later. "I remember rounding the bases, thinking this is unbelievable. I had goose bumps, chills, everything that you could possibly imagine, especially doing it against the yankees, which was my favorite childhood team."

It was Peltier's first major league home run. It would also be his last in a career that spanned three major league seasons.

Peltier began his professional career in 1989, taken by the Rangers in the third round out of Notre Dame. He signed with the Rangers after a junior season to remember with the Fighting Irish.

Peltier hit .446 with 15 home runs and 93 RBIs for Notre Dame, in 68 games in a season still talked about by Irish faithful. He struck out looking just twice, Peltier noted to the Notre Dame Athletics site in 2004.
"It came down to a level of confidence and knowing yourself," Peltier told the site, "driving the ball no matter where the pitch is. Inside or outside, up or down, I always was looking to help my team score runs."

He debuted with Texas in June 1992, playing in 12 games and going 4 for 24. He returned for 1993, looking to make the team out of spring training. He hit a ninth-inning, two-run home run in one spring training game, helping his own cause for staying with the club.

Peltier played in one game in April and returned in June, hitting that only major league home run. In one two-game stretch in June, Peltier went 5 for 7. That put the Rangers in a situation of wanting to keep him up but possibly not having room for him.

Peltier played in 65 games for the Rangers that year, staying up almost the rest of the season. But it was back to AAA for 1994. The Rangers released him in March 1995. Peltier told reporters later he believed it was because he refused to be a replacement player.

Peltier played that year in the independent leagues, for the St. Paul Saints. He hit well enough to sign on for 1996 with the Giants, playing 31 games for San Francisco that year, including his first start, where he drove in three runs.

"I knew he could hit,'' Giants manager Dusty Baker told reporters after that first Peltier outing. "He told me in spring training, the first time I met him, 'Don't forget about me. I'm your man.'

"I asked him how he got here," Baker continued, "and he told me the story about Texas and not being a replacement player. I knew he was a man of his convictions. He took a step back, went to the Northern League, and was tearing it up at Phoenix. It's not hard to keep your eye on a guy when he's hitting close to .400.''

Peltier returned to St. Paul in 1997 for one more season and his playing career was done. A native of Clifton Park, NY, Peltier has since stayed in Minnesota, making it his home.

He returned to Clifton Park in 2009, inducted into his old high school's athletic Hall of Fame. It was during that trip that he recounted his first and only home run to local television station CBS6 Albany. He also spoke about his status in the club of former major leaguers.

"I don't live my life as saying I'm a former major league player," Peltier told the intervier, "however, it's something I always have, that gratification that I set my goals and I achieved them."