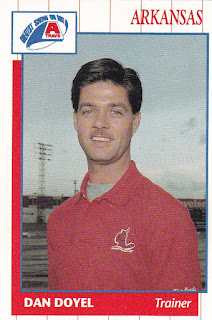 When he signed on as a minor league baseball trainer, he stayed in-state again. He signed on with the Cardinals.

Doyel served at least seven seasons as a trainer in the Cardinals organization. He spent one of those at AA.

Doyel's minor league training career started by 1987, sent by the Cardinals to serve as trainer at rookie Johnson City.

He spent two seasons with Johnson City before he moved up to single-A Savannah for 1989.

For 1990, he served as trainer for the Travelers at AA Arkansas.

He arrived at high-A St. Petersburg for 1991. He returned there for 1992, where his card that year included his hobbies as baseball, softball and fishing. That year marked his final recorded season as a minor league trainer.