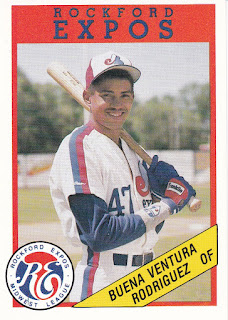 Buen Rodriguez' Jamestown Expos down by a run in the ninth, Rodriguez stepped to the plate.

The go-ahead run was on base and Rodriguez soon brought that go-ahead run home, with a triple, putting his Expos ahead to stay, 4-3, according to The Associated Press.

Rodriguez hit that game-winning triple in Game 1 of the 1989 New York-Penn League championship series, a series in which Jamestown would go on to win.

He also hit that triple in his first year as a pro. He would only get one more season.

Rodriguez' career began that year in 1989, signed by the Expos as an undrafted free agent, out of his native Dominican Republic. Rodriguez is also known by his full name, Buenaventura Rodriguez and as Buena Ventura Rodriguez.

With the Expos, Rodriguez played his first year at short-season Jamestown. He hit .211, over 67 games. He also hit a total of four triples and stole 21 bases.

He moved to single-A Rockford for 1990, but his average didn't improve. Over 95 games, the infielder hit just .212. He also hit just two triples and stole only eight bases. It was his final year as a pro.