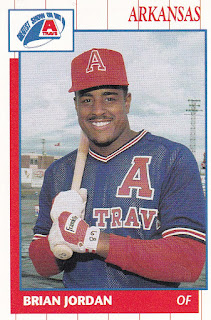 Brian Jordan started his career as a two-sport star. He played baseball and he played football, both professionally.

Years after he moved on from football, though, he recounted to The Oklahoman how he gave up his NFL career before he was ready.

"But I did because I wanted to give baseball a fair shot," Jordan told The Oklahoman. "I love the challenge of the game of baseball, and things have worked out great for me. I have no complaints."

Jordan's focus on baseball worked out over 15 total major league seasons spent mostly with the Cardinals and Braves. He ended his career with a .282 average, 184 major league home runs and an all-star nod.

Jordan's baseball career began in 1988, taken by the Cardinals 30th overall out of the University of Richmond.

In 1989, he got drafted again, this time by the Buffalo Bills. He ended up with the Atlanta Falcons as a defensive back and got into four games that fall.

While Jordan played football, he continued to play in the minors, though abbreviated games. He saw 11 games at single-A St. Petersburg in 1989, 25 between St. Petersburg and AA Arkansas in 1990 and 61 at AAA Louisville in 1991.

Jordan then gave up football and started his major league baseball career. He played in 55 games for St. Louis in 1992.

In July 1992, he spoke with The St. Louis Post-Dispatch about the importance of his family growing up.

"'I had a great childhood," Jordan told The Post-Dispatch. ''A learning childhood. A loving childhood. It makes me appreciate my parents. They sacrificed so much. I sit back now and just say, 'I love them for that.' I owe them everything."

He hit an eighth-inning home run in Game 4 of the NLCS to give St. Louis the win. Afterward, he had to rush to his young son, who had fainted.

"God and family first," Jordan told The Baltimore Sun later. "That just put it into more perspective there. The home run there was great and exciting, but if your family is affected, then you just forget about baseball."

Jordan played three seasons for the Braves, then two with the Dodgers. He then ended his career playing 2004 with the Rangers and 2005 and 2006 back with the Braves.