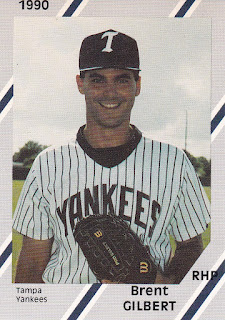 The Prince William Cannons came from behind to win this May 1991 game and reliever Brent Gilbert received the benefit, according to The Washington Post.

The Cannons pulled ahead in the eighth, with Gilbert as the pitcher of record and he picked up his third win of the campaign, The Post wrote.

Gilbert picked up that win in his second professional season. He went on to see time in just one more. He never made AA.

Gilbert's career began in 1990, taken by the Yankees in the 19th round of the draft out of Texas A&M. He also played at Blinn College.

With the Yankees, Gilbert started in the rookie Gulf Coast League. He got into 10 games there, where he picked up two losses and a 3.50 ERA. He also saved two.