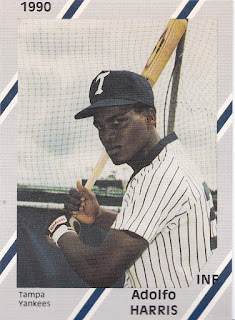 The Gulf Coast League White Sox looked to close out a no-hitter in early August 1990, but one of the players standing in their way was GCL Yankee Adolfo Harris, according to The Sarasota Herald-Tribune.

With a runner on first due to a walk, Harris stepped to the plate - and flied out, The Herald-Tribune wrote.

The White Sox went on to close out the no-hitter. For Harris, his short career would soon be closed out, as well, after a single season. Harris played that one season for the GCL Yankees. He didn't return for a second.

Harris' career started and ended in 1990, having been signed by the Yankees as a free agent the previous year out of his native Dominican Republic.

Assigned to the rookie Gulf Coast League, Harris knocked in a run on a single in a July game as he helped the GCL Yankees to a 3-1 win.