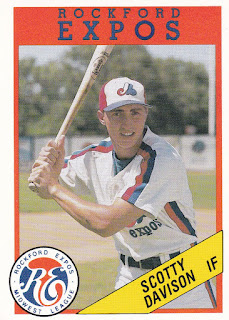 Scott Davison was out of baseball by 1992. He'd played shortstop in the Expos system for four seasons, but it didn't work out, and he was released.

After turns as a UPS driver and helping coach at the high school in his hometown, Davison, in 1994, thought he should give the pros another try - as a pitcher, according to The Seattle Times.

"I called a Mariner scout I knew and asked him to watch me throw," Davison told The Times.

The scout did, and soon Davison was a pro again. Not only was he a pro again, he was also on his way to the major leagues.

By the time his career was finally over, Davison had seen time in two major league seasons, both with the Mariners. He also even saw time in Japan.

Davison's first pro career began in 1988, taken by the Expos in the fourth round of the draft, out of Redondo High School in California.

At Redondo, Davison was both a pitcher and a shortstop. His father Ralf Davison told The Los Angeles Times his son always had a good bat and arm.

"I started him on a plastic tee and he hit the (bleep) out of the ball," Ralf Davison told The LA Times. "He picked up a ball when he was 4 or 5 years old. You could tell he was going to have a good arm. He could just fire it. He's excelled ever since he got into T-ball."

When the Expos came calling, they chose the hitter-infielder Davison. He started in the rookie Gulf Coast League, moving to short-season Jamestown in 1989. He hit .239 at Jamestown, then just .215 the next year at single-A Rockford.

Then came his two years away from the game, and his return as a pitcher.

He signed with the Mariners for 1994, and, still just 23 years old, he started moving up. He started at short-season Bellingham, getting a 1.80 ERA. He then moved up to single-A Appleton. By the end of the year, he was at AAA Calgary.

For 1995, Davison posted a sterling 0.89 ERA in 34 relief outings at AA Port City. He then saw time at AAA Tacoma. That September, he debuted in Seattle.

With the Mariners in 1995, Davison got into three games, 4.1 innings of work. He gave up three earned. He returned for another five outings, nine innings, for 1996. He gave up nine earned. He'd made the majors for a total of eight games. it was the extent of his major league career.

Davison spent 1997 injured, then returned for 1998 to play in Japan. He got five outings with the Chiba Lotte Marines, 7.2 innings. He gave up two earned. He then played one more season, coming back in 2001 in the minors, ending his career.