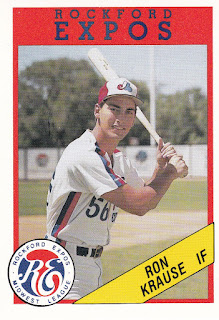 West Palm Beach's Ron Krause actually had a better year in 1992, but his team didn't.

In 1991, the high-A Expos won the entire Florida State League playoffs. In 1992, they made the playoffs, but exited quickly, according to The South Florida Sun-Sentinel.

"What a difference a year makes," Krause told The Sun-Sentinel after the loss. "Last year was an unbelievable feeling. This year is one hell of a letdown."

For Krause, his performance in 1992 was enough to help him get to AA Harrisburg in 1993. His stay at Harrisburg, though, was brief. It was also the end of his career.

Krause's career began in 1989, taken by the Expos in the third round, out of Eastlake North High School in Ohio.

With the Expos, Krause played his first season between the rookie Gulf Coast League and short-season Jamestown. Between them, he got into 58 games, hitting .289.