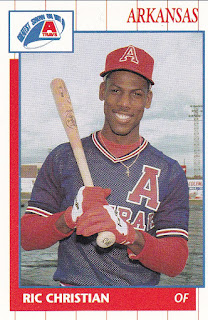 Chambersburg's PONY team took the section win in this July 2012 contest and head coach Rick Christian praised his young players, according to The Chambersburg Herald-Mail.

"We got some good timely power by Carlin and Ian," Christian told The Herald-Mail of his son and another player. "We kept adding onto our lead. We scored in every inning but the fifth. We ran the bases well. We try to put pressure on the other team. It was a great team effort."

Years earlier, it was Christian on the field looking to put pressure on other teams as an outfielder in the Cardinals system. Christian played in seven pro campaigns. He made AAA, but not the majors.

Christian's career began in 1986, taken by the Cardinals in the first round of the June secondary draft out of Hagerstown Community College. Christian was also credited as Ric Christian.