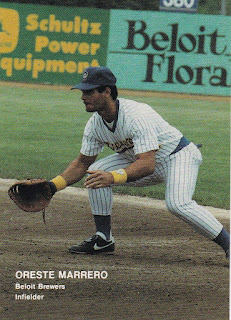 Oreste Marrero appreciated his call to the majors in June 1996, not only because it marked his second trip to the bigs, but also because of his father, according to The Los Angeles Times.

"I'm very, very excited," Marrero told The Times after his promotion. "What made it so special was that I called my father today and asked how he was going. He said: 'Thank you. You gave me the greatest Father's Day present.' I feel very happy I came up on this day."

Marrero's career began in 1987, signed by the Brewers as a free agent out of his native Puerto Rico. The Brewers also signed his brother, Vilato Marrero.

Marrero started with the Brewers at rookie Helena. He hit .325 in 51 games there. He played at Helena, single-A Beloit and short-season Boise over his first four seasons.

Along the way, Marrero spoke to author George Gmelch about the transition from Spanish-speaking Puerto Rico to English-speaking minors.

"I care about learning English, because I know if I speak English I get to the majors faster," Marrero told Gmelch for his book Inside Pitch.

Marrero made AA El Paso briefly in 1992, then moved to the Expos system in an early 1993 trade. He started that year at AA Harrisburg. In August, he made the jump to Montreal.

He then played 1994 at AAA Ottawa and then moved to the Dodgers and AA San Antonio and AAA Albuquerque for 1995.

With San Antonio in April 1995, Marrero hit a ninth-inning, game-winning home run on his preferred pitch, the fastball.

"I was surprised he threw me a fastball," Marrero told reporters after the game. "He threw it up in the zone, I think he wanted it lower,"

Marrero then made his return to the majors in 1996, getting 10 games with the Dodgers. He picked up three hits in eight at bats, marking the extent of his major league career.

Marrero, however, continued playing in the minors and independent ball through 2005. He played in Mexico in 1998, then independent Madison for 1999. In 2000, he began a five-season run at independent Bridgeport. He's last recorded as playing in 2005 with independent Lancaster.

He's listed in 2017 as an instructor at Artistic Stitch Sports Complex in Glendale, NY.