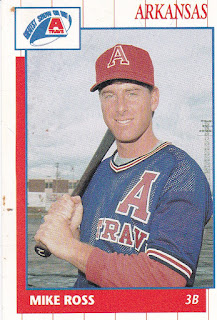 The score tied in the ninth an a trip to Omaha on the line, Mike Ross stepped to the plate and sealed the win for his Cal State Fullerton squad with a three-run home run, according to UPI.

Fullerton head coach Larry Cochell took the opportunity afterward to complement Ross and a teammate as the team headed off to the College World Series.

"Any time you have guys like Mike Ross or Keith Kaub up with men on base, you have a chance of scoring," Cochell told UPI. "We have a bunch of great kids who have done everything we've asked them to this year."

Fullerton went on to the national semifinals that year. Ross would soon move on to the pros. Ross played five seasons. He made AAA, but not the majors.

Ross' pro career began that year in 1988, taken by the Cardinals in the fourth round of the draft out of Fullerton.

At Fullerton, Ross doubled in a run in a College World Series win against Miami. Earlier that year, Fullerton picked up three wins in New Orleans as Ross went 5 for 15, according to The Los Angeles Times

"It was nice to go down there and show how well we can play," Ross told The Times afterward. "We beat three good teams, and none of the games were close."

Ross started with the Cardinals at single-A Savannah and short-season Hamilton. He hit .234 in 58 games.

He moved to single-A Springfield in 1989. The second baseman put together a string of 49-straight errorless games that ended in August. He hit .268 at the plate over 129 games.

Ross made AA Arkansas for 1990 and would play there each of the next two seasons. He split 1991 between Arkansas and AAA Louisville. He hit .211 in 67 games at Louisville.