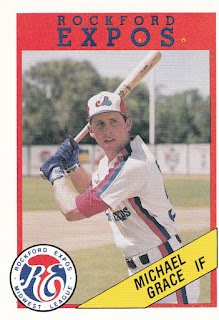 The Salt Lake Trappers had taken the lead in this late-June 1989 game and Mike Grace helped them extend it.

Leading off the seventh inning, Grace hit one over the fence, to extend that lead to 7-4, according to The Deseret News.

That home run was one of six Grace hit in 63 games that summer for independent Salt Lake City. It was a performance that caught the eye of the Montreal Expos, seeing his contract purchased by the club before the year was out.

Grace ultimately played in four more seasons, but he never made it above AA.

A native of Texas, Grace's pro career began that year in 1989, signed by the independent Salt Lake City Trappers.

With the Trappers, Grace hit .350 while knocking in 37. He also hit 17 doubles, one in a late-June game and another in a mid-July game to help extend a Trappers lead.

After moving to the Expos, Grace played four games at short-season Jamestown. He then moved to single-A Rockford for 1990. He hit .287 on the year, with three home runs and 42 RBI. Grace also won organization player of the month honors that June.