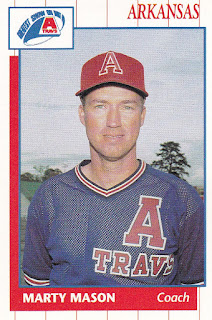 Rochester Red Wing starter Yohan Pino tossed a 2-0 shutout in this May 2014 game and his pitching coach Marty Mason attempted to explain to MiLB.com why

"It's all about getting strike one," Mason told MiLB after the win. "He did that mostly with the fastball today. He mixed a few off-speed pitches in there, but mostly, out of those 29 first pitches, probably 25 of them were fastballs. It was all about attacking the zone."

Years earlier, Mason once threw strikes himself over seven professional seasons. While he didn't throw enough strikes to make the majors, he later used his knowledge to teach others the game over nearly three decades as a coach.

Mason's career in baseball began in 1980, signed by the Yankees out of Western Kentucky University.

Mason started with the Yankees at short-season Oneonta. He moved to single-A Greensboro in 1981 and went 11-2, with a 2.73 ERA over 50 relief outings.

He moved to the Cardinals and single-A Springfield for 1982. He played much of 1984 at AA Arkansas. He last played in 1986 at single-A St. Petersburg, where he saw four outings, one start.

Mason then stayed at St. Petersburg for 1987, where he became the team's pitching coach. He coached at single-A Savannah in 1988 and St. Petersburg again in 1989.

He arrived at Arkansas for 1990 and he stayed there for sevens seasons. He made AAA Louisville as coach in 1997. Then, in 2000, he made St. Louis as bullpen coach.

"To get strike three you first have to get strike one," Mason told the publication. "A lot gets made of 'pitch to contact.' Hey, we like strikeouts as much as anyone. But it's more important to control counts. You do that with strike one. If they want to hit it, then fine, because strike one is going to be a quality pitch."