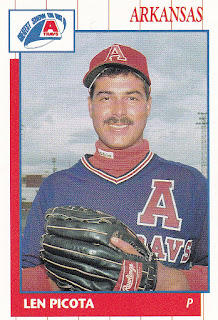 Len Picota threw a gem for the Nashua Pride this night in 2001 at Atlantic City, according to The Nashua Telegraph.

He struck out nine and allowed five hits over eight innings in the 1-0 victory, The Telegraph wrote.

"Tight games like this make you concentrate a little more," Picota told The Telegraph afterward. "You don't want to make mistakes in any situation. You've got to try to stay away from extra-base hits and just make quality pitches."

Picota threw that gem a full 17 years after his professional career began. He played in the minors over 10 of those seasons and later saw Korea and the World Baseball Classic. He made AAA, but he never made the majors.

Picota's career began in 1984, signed by the Cardinals as an amateur free agent out of his native Panama. Picota was also credited as Lenin Picota.

Picota moved to the Expos and AA Harrisburg for 1992. He also turned closer, saving 26 games for the club, turning in a 1.88 ERA.

He played one more season in the minors, including eight appearances at AAA Ottawa with the Expos and 22 with the Mariners at AAA Calgary.

Picota then played in Mexico and returned stateside in 2001. He even saw time that spring with the Expos, before playing the year at independent Nashua.

He then played in Korea in 2002 and 2003, then later returned to Mexico. He made the World Baseball Classic for Panama in 2006. He went four innings in a loss to Puerto Rico. He's last credited as playing for Aguascalientes in 2007.