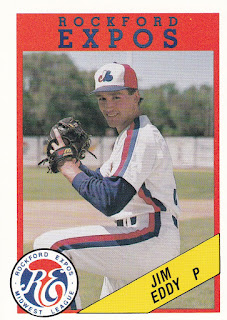 After a professional career that lasted four seasons, Jim Eddy soon found himself back on the field, playing baseball on the weekends, according to The Deerfield Beach Observer.

"You want to have some competition, so that's why I don't play softball," Eddy told The Observer. "I wouldn't play in a league if there wasn't any competition."

Eddy spoke to The Observer as an athletic trainer and high school football coach. He also spoke two decades after the end of his professional baseball career, one that took him to high-A, but no higher.

Eddy's pro career began in 1989, taken by the Expos in the 38th round of the draft, out of Marietta College in Ohio.

At Marietta, Eddy pitched well enough to win first-team post-season All-American honors in 1989. He also won honorable mention all-conference in 1987 and second-team in 1989.

With the Expos, Eddy played his first year between the rookie Gulf Coast League and short-season Jamestown. Between them, he went 9-1, with a 2.16 ERA.

That September, Eddy helped pitch Jamestown to the New York-Penn League championship, with a complete-game shutout in the deciding game over Pittsfield.

For 1991, Eddy made high-A West Palm Beach. He got just 13 outings, four starts. He was also back in the playoffs, picking up a post-season win.

He returned to West Palm Beach for 1992, but got just four outings. He picked up a save in one of those outings in late-April. In another April outing, it was three innings, without giving up a run. But his career ended abruptly after those four appearances, with time in four professional seasons.

Eddy has gone on to serve as a trainer, serving in 2013 in that post for Highlands Christian Academy in Florida.