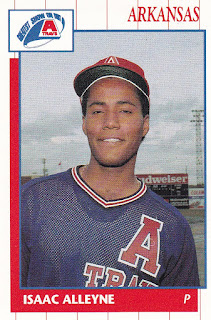 Isaac Alleyne attempted to explain to The Billings Gazette in April 1988 how exactly Alleyne's Salt Lake Trappers won 29 games in a row in 1987.

"On and off the field we were always together. We were like a family," Alleyne told The Gazette. "When you've got that kind of togetherness, you're going to win some ballgames."

Alleyne went on from the Salt Lake City squad to the Expos system and then the Cardinals. While he later earned the title "promising," he briefly made AA, but not the majors.

Alleyne's career began in 1987, signed by Salt Lake out of Ranger Junior College and Lamar University.

He moved to the Expos and short-season Jamestown for 1988. He started 14 games there and ended with a 2.72 ERA and an overall 5-5 record.

That off-season, the Expos sent Alleyne to the Cardinals.in a trade Los Angeles-area product Romy Cucjen. In a feature on Cucjen, The Los Angeles Times described Alleyne as a "promising left-handed pitcher."

Alleyne's time with the Cardinals, however, was short-lived. Assigned to AA Arkansas for 1990, Alleyne saw 20 outings, seven starts. He went 1-4, with a 5.86 ERA to end his career.