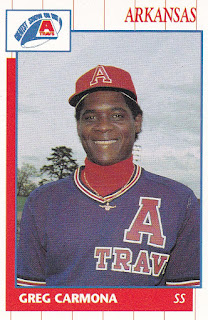 "He has good range, a real good arm," Riggleman told The Post-Dispatch. "He's very raw. He really has to learn how to play the game."

Carmona played that year between single-A Savannah and rookie Johnson City. He made AA Arkansas in 1990 and AAA Louisville in 1991. Whatever he learned, it wasn't enough for him to make the majors.

Carmona's career began in 1987, signed by the Cardinals as a free agent out of his native Dominican Republic.

Carmona started with the Cardinals at Johnson City. He hit .175 over 47 games. He stole 14 bases.

He moved to Savannah and returned to Johnson City for 1988. He hit .226 between them in 54 games. He doubled in a June game at Johnson City.