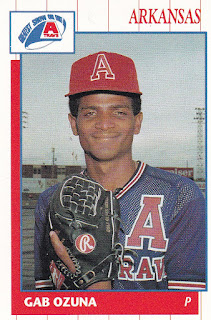 Louisville's Gab Ozuna started the 10th in this June 1993 game with an out. A single, two walks and a single later, he ended it with a loss, according to The Louisville Courier-Journal.

Interim Louisville manager Mark Riggins reacted afterward by noting the walks both came on full counts, according to The Courier-Journal.

"He struggled with his command there," Riggins told The Courier-Journal. "He's been around in Double-A a couple of years, and he ought to be able to handle that situation."

Ozuna faced all kinds of situations over seven years in the minors. He made AAA, but not the majors. He later continued to play in Mexico, Taiwan and Italy and then turned to coaching.

Ozuna's career began in 1988, signed by the Cardinals as a free agent out of his native Dominican Republic.

Ozuna started with the Cardinals between single-A St. Petersburg and rookie Johnson City. He went 1-4, with a 2.04 ERA over 26 relief outings between them. He also saved nine.

Ozuna then made AAA Louisville for 1993. He saw time in 35 games there, saved four and ended with a 2.93 ERA. He played one more season at Arkansas in 1994 to end his minor league career.

Ozuna then moved on to Mexico and Taiwan. He arrived in Taiwan in 1996 and saw time over six seasons. He stuck around long enough to be named among the top 10 foreign born pitchers in league history. He's also credited as playing in Italy in 2003.