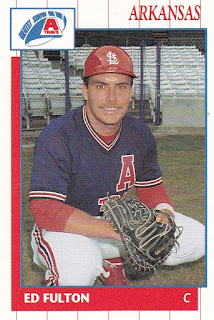 Ed Fulton helped get his team out of a slump in this July 1990 game - and himself, according to The Louisville Courier-Journal.

Fulton hit his first AAA home run to start the Redbirds scoring and break a team scoreless-inning streak. Fulton also knocked a triple and a single, The Courier-Journal wrote.

"We needed to win that game, and Ed needed that for his confidence," Louisville manager Gaylen Pitts told The Courier-Journal afterward.

Fulton continued at AAA for parts of the next five seasons. He never made the majors. He has, however, gone on to help build the confidence of other players as a longtime coach in college. Fulton has served two decades as the head coach at Averett University in Virginia.

Fulton's career began in 1987, taken by the Cardinals in the 16th round of the draft out of Florida State University.

At Florida State, Fulton helped the Seminoles to the 1986 College World Series. Going into Omaha, Florida State and Fulton prepared for rival Miami.

"Chances are good that if I get a good throw, I can throw them out," Fulton told The South Florida Sun-Sentinel then. "But if I make a good throw and they steal, they've probably stolen off the pitcher anyway. There's nothing I can do about it. So, what I have to do from that point is play my game, which is to catch the ball and throw the ball."

Fulton started with the Cardinals at rookie Johnson City. He hit .290 with 13 home runs in 67 games. He moved to single-A Springfield for 1988 and then single-A St. Petersburg for 1989.

Fulton continued with the Cardinals through 1993, playing much of his time back at Louisville. He didn't see St. Louis. He then played 1994 at AAA Toledo with the Tigers and briefly at AAA Pawtucket with the Red Sox in 1995, ending his career.

Fulton soon signed on with Averett, shortly after the school started its baseball program. He's worked with the school since, continuing in 2017. His teams have won 25 games seven times, but saw a down year in 2017.